Harnessing the Spirit of Competition to Prevent Workplace Injuries

At any large utility, ergonomic risks can be found in many forms and locations, from office desks and warehouses, to garages and in the field. Because these risks are so pervasive, they often represent one of the biggest opportunities to move the needle on overall safety results.

Pacific Gas and Electric Company (PG&E) determined that more than 50 percent of its worker injuries are attributable to ergonomic-related or cumulative stress. To help tackle this challenge, PG&E launched a new effort last year to bring together best practices from all corners of the organization. The results not only shined a new light on the importance of ergonomics and safety, they provided a forum to bolster team building and employee engagement.

The subtle and insidious nature of repetitive stress is that it’s hard for workers to identify the actions that are causing it. “They kind of creep up on you,” said Arnie Neustaetter, ergonomics program manager at PG&E. “You don’t necessarily realize you have tissue damage occurring while it’s going on. A classic example is a back injury over a career of heavy lifting, without using proper body mechanics.”

In 2014, an effort initiated by PG&E’s industrial working group leveraged the model of the internationally recognized Ergo Cup® competition, which presents awards annually for outstanding solutions through training, engineering and teamwork. It’s considered the gold standard for recognition in ergonomic excellence, and it encourages the adoption of its format by assisting companies looking to plan and host their own internal Ergo Cup® competitions.

I was impressed with how many ergonomic initiatives exist across all lines of business, and how people from around the company came together to share their struggles and successes.

PG&E’s inaugural effort proved to be a big success among attendees and leaders from around the company. The company divided teams into two divisions (office and industrial) and created four categories to reflect the diversity of solutions (communication/training, tool/work method, program/initiative and comprehensive program). At a festive ceremony last December, representatives from Gas and Electric Operations, Customer Service, Revenue Operations, Sourcing and others were handed gold, silver and bronze awards for their innovative solutions. In all, 24 teams and 180 individuals took home awards that night.

The engagement leading up to that day was the result of several factors. For utilities looking to launch similar efforts, here are a few keys ways to help make them a success:

1. Make it relevant to your organization’s priorities

Although PG&E followed the international guidelines, the categories and criteria used for internal awards were tailored specifically to the areas of focus for the company. Input from its multiple lines of business ensured that teams felt included in the process of developing categories, determining criteria and soliciting nominations.

2. Build from the ground up

The event was conceived and designed as a grassroots effort: Local teams came up with their own projects, videos and presentations independently, as opposed to being directed by leadership or ergonomic experts. Also, by highlighting programs that were already running within the operating lines of business, employees received recognition for the programs they had worked on, as opposed to creating new work to do. 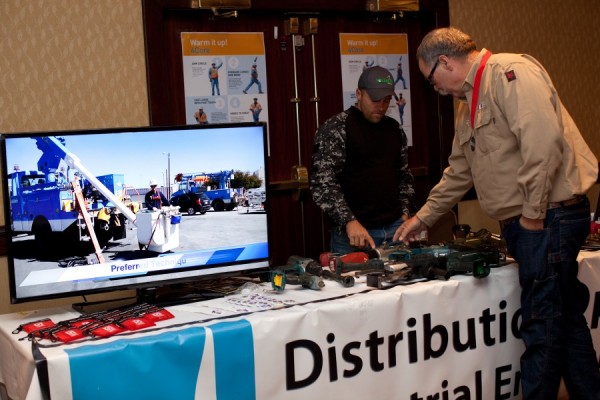 Representative showcasing samples from the Electric Tool Deployment Initiative, which earned a silver medal at the awards ceremony.

“We didn’t realize how competitive these groups were,” said Neustaetter. “This event just brought out an amazing spirit of competition that I didn’t realize was lurking under the surface. And it hit a chord with these groups — they wanted to put their best foot forward.” The awards decision wasn’t a cakewalk, either. Teams needed to submit presentations describing the processes used, how it resulted in risk reduction, their keys to success, how the change was implemented, the materials used, and more. Representatives from three outside ergonomic consultancies were invited to judge the winners.

4. Create buzz at all levels

The awards were promoted early and often. Nominations were solicited months in advance, and leaders were actively recruited to attend and encourage participation among their workgroups. In fact, one attendee noted that, “senior leadership had full buy-in and they just let us run with it, which was a real key to our success.” Coordinators for PG&E’s Ergo Cup received a total of 72 entries in eight categories: 40 from office staff, and 32 from industrial teams. Several officers attended the awards ceremony, which was covered by an in-house video crew and the corporate communications team who shared the news on the company’s Intranet.

“The spirit of the day was about sharing best practices and techniques, and that was the best benefit,” said Neustaetter. That spirit came alive in an Olympics-cum-Academy Awards-style event hosted at a local, offsite location. “It was very fun and festive,” noted one employee who was a triple-award winner. “It wasn’t your everyday meeting.” Another post-event survey comment offered, “This was a great way to acknowledge and reward employees for their work.”

“I was impressed with how many ergonomic initiatives exist across all lines of business, and how people from around the company came together to share their struggles and successes,” said Greg Kiraly, senior vice president of Electric Distribution Operations. “The quality of their work has had a huge impact on the company.”

PG&E will look to build on the success and momentum of last year’s effort with another event scheduled for Fall 2015. Ultimately, the big winner will be employees, who will benefit from the innovation and dedication of their co-workers to create a safer working environment for everyone.

John Kaufman is a senior manager in the Corporate Affairs organization at PG&E.