Recently, SaskPower entered into PPAs for two, 10-megawatt (MW) solar projects brought forward by the First Nations Power Authority (FNPA). The Pesâkâstêw Solar and Awasis Solar facilities, which will be located near the cities of Weyburn and Regina in southern Saskatchewan, will generate revenue for First Nations and provide enough clean, renewable energy to power more than 5,000 Saskatchewan homes. The agreement is estimated to be worth $85 million over 20 years.

“Indigenous procurement is a priority for SaskPower, and we are pleased to build on our strong relationship with FNPA to finalize these two power purchase agreements,” said Mike Marsh,  SaskPower president and CEO. “These projects are a crucial step toward achieving SaskPower’s short-term goal of adding 60 MW of solar generating capacity to the provincial grid.”

SaskPower has committed to reducing greenhouse gas emissions by 40% by 2030, and increasing renewables is a key means of meeting that commitment. The 20 MW of solar from the PPAs with Awasis Solar and Pesâkâstêw Solar increases the amount of solar power in Saskatchewan’s generation mix. FNPA is a nonprofit organization that works to include First Nations in the power sector to achieve sustainable economic development and community benefits. SaskPower and FNPA signed the First Nations Power Authority Master Agreement in 2012 to develop independent power generation projects directly benefiting Saskatchewan First Nations.

In 2019, SaskPower and FNPA signed an opportunity agreement setting out conditions for developing 20 MW of new utility-scale solar generation projects. An official signing ceremony was held on May 31, 2019. The agreement gave FNPA the responsibility of securing First Nations-led solar generation projects and ultimately led to the selection of Pesâkâstêw Solar and Awasis Solar.

“We are confident that these projects will serve as shining examples of how Indigenous-led power projects can meet the need of SaskPower’s electricity demands for clean sources of renewable energy,” said FNPA CEO Guy Lonechild. 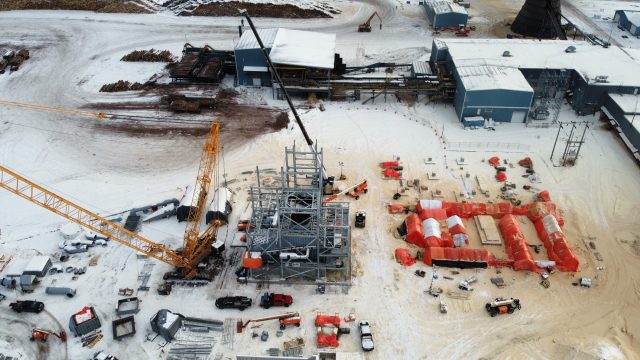 “Star Blanket Cree Nation is honored and proud to be part of the Pesâkâstêw Solar Project team,” said Star Blanket Cree Nation Chief Michael Starr. “We would like to thank all our dynamic partners for moving this 10 MW solar project forward and securing the PPA with SaskPower. This 20-year project will provide revenue for our Nation, as well as create employment and training opportunities.”

Awasis Solar, a partnership between Cowessess First Nation and Elemental Energy, will develop, own and operate the second project, which will be located near Regina.

“Cowessess First Nation has been on our renewable energy journey for a decade — we have a 1 MW wind, solar, and battery facility, and we are currently installing 320 kW of solar on five community buildings back home,” said Cowessess Chief Cadmus Delorme. “The development of our small-scale projects has allowed our team to gain expertise in the sector, and we are now ready to embrace our first utility-scale energy project.”

Construction timing for the projects will be determined after further engineering work is complete by Awasis Solar, Pesâkâstêw Solar and SaskPower.

Construction activities have also begun on the First Nations-owned Meadow Lake Tribal Council (MLTC) Bioenergy Centre. In October 2019, a PPA between MLTC and SaskPower was signed for up to 8 MW of carbon-neutral power.

The bioenergy power plant is being constructed at Canada’s only 100% Indigenous-owned sawmill, MLTC’s NorSask facility, located near Meadow Lake, Saskatchewan. Energy will be generated on-site by burning residual wood waste such as bark, sawdust and planer shavings. This carbon-neutral approach to electricity generation will significantly improve air quality for area residents by reducing smoke and other harmful emissions. In total, the plant is expected to decrease greenhouse gas emissions by more than one million tonnes over 25 years.

Serving more than 540,000 customer accounts, SaskPower is Saskatchewan’s leading energy supplier. It is defined by its commitment to support economic growth and enhance the quality of life in Saskatchewan. SaskPower’s corporate mission is “ensuring reliable, sustainable and cost-effective power for our customers and the communities we serve.”

Joel Cherry is a media relations and issues management consultant at SaskPower.