An Intelligent Way to Integrate AMI with ADMS for Outage Management

The volume and accuracy of information can be significant hindrances for power utilities looking to use their Advanced Metering Infrastructure (AMI) system in grid operations. AMI implementations can offer multiple signals perelectricity meter, which can overwhelm operators or systems. This is particularly true if a utility’s outage response is facilitated by an Outage Management System (OMS). Connecting these systems can be difficult as timely, accurate and relevant information is required to help control rooms accurately track and respond to outages.

In 2017, EPCOR began a project to integrate its AMI and OMS systems. EPCOR’s IT architects learned that failing to manage the AMI data in real-time prevented their peers from successfully using AMI signals in their control rooms and OMS systems. They decided a focal point for the project would be to build a middleware system to filter this data down to usable portions and control which AMI signals flowed into their OMS. OMS during a fast-moving storm—the grey areas are distribution circuits that are deenergized and the flags indicate the source of the interruption. In this view, the total extent of the storm’s impact is easily seen, and the number of customers impacted are determined automatically.

By implementing intelligent middleware processing that leverages information about EPCOR’s power system (in near real-time), AMI signals are controlled for volume, relevancy and timeliness. This integration has enhanced EPCOR’s ability to locate the source of outages in their grid and communicate outage information to their customers, allowing a faster and safer response.

In 2017, EPCOR achieved two significant milestones in its electricity business — the completion of its first Advanced Distribution Management System (ADMS) and the completion of its AMI rollout. EPCOR’s ADMS implementation included an upgraded SCADA (Supervisory Control and Data Acquisition) system, plus a new combined Distribution Management System (DMS) and OMS. These systems fully transitioned EPCOR’s electricity control room operations from legacy paper-based methods to fully digital, system-guided operating practices. EPCOR completed the change-out of all electricity meters in its service territory to AMI meters in the same year. This system combination opened the door to using the suite of signals from the advanced meters to enhance EPCOR’s new digitally driven outage management processes using their OMS. EPCOR has operated through a centralized control room since the 1960s, which meant no prior consolidation of grid operation functions was needed.

Like most electricity outage management systems, EPCOR’s OMS creates an “incident” within the ADMS operator interface when a disturbance in the power system is detected or when information about an outage is manually entered into the system. Detection depends on combining signals provided by remote telemetry, such as SCADA, with the connected model in the DMS. For example, a SCADA-monitored circuit breaker trips to lockout, which triggers an OMS incident by identifying all of the customers affected, based on the connectivity model in the DMS. The outage incident interface then guides operators through determining the faulted section of the grid. The OMS incident also captures (and assists with) the switching sequence utility personnel use to isolate the grid’s damaged component and restore customers. As the outage event proceeds, customer phone calls are logged against the incident, and other information is captured to create a complete record of the event from start to finish. 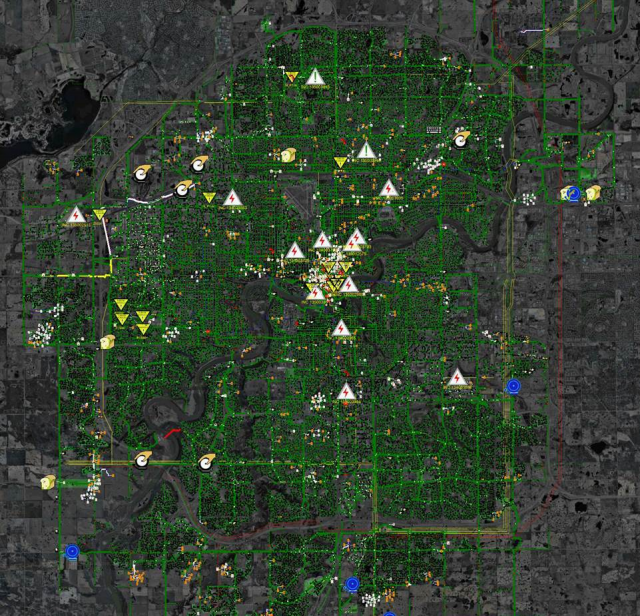 However, like most distribution companies, EPCOR heavily uses passive fusing to protect branches from the primary distribution circuit. When a system fuse blows, the upstream circuit breaker protection will detect the passage of the fault current and indicate a SCADA alarm. In a well-designed system, the fuse will clear the faulted branch before the circuit breaker trips to protect the rest of the customers on that circuit. This situation provides operators an indication of an outage in the grid but no firm location information. In this case, the operator still depends on customer calls to begin identifying the outage’s full scope and location. Eventually, with enough call information, the OMS system helps the operator determine the blown fuse and the outage’s full extent. Using DMS model connectivity, the outage incident collects a list of all customers impacted by the outage. These pieces of information allow the control center and field trouble crews to begin isolating the damage and restoring customers.

The meters used in EPCOR’s AMI system provide rich, time-interval readings for accurate and timely energy consumption billing. However, they also offer more: within each meter is a small energy storage device that provides enough power to send a signal when grid energy is lost — called a “last-gasp.” Similarly, meters also communicate a “first breath” signal when re-energized.

Additionally, the AMI management application has the functionality to “ping” any meter. If the meter responds to the ping, it is energized. If the meter does not respond, it can be assumed the site is without power. In 2017, EPCOR’s project delivery team capitalized on these features to enhance the newly established OMS processes in EPCOR’s electricity control room.

Improving outage response one gasp at a time

“From talking with our peers who had attempted to connect their AMI to their OMS, we learned that the sheer volume of data coming in could overwhelm our operators,” said Jing Wu, senior manager of planning and architecture. “We knew that to be successful and attain the benefits we were hoping for, we needed to ensure that the information going to the control room was timely, useful and accurate.”

The challenge was that meter last gasps contain false positives, which do not require an outage response. False positives include test meters, crews performing meter swaps, new site energizations, planned outages, and instances where the meter is located downstream of the main site breaker (line-side breaker), such as in apartment suites. 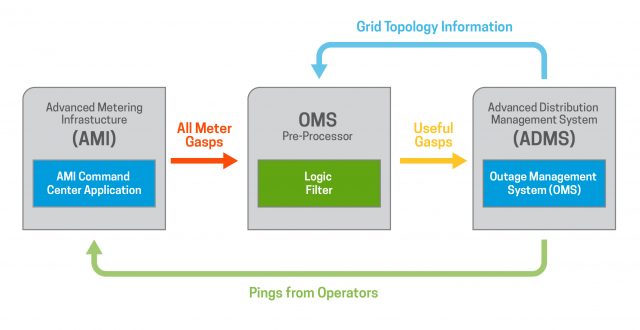 This solution leverages the known connectivity of the distribution system (the grid topology information) fed back from the ADMS system to enable intelligent filtering and control over the AMI gasp information. This approach allowed EPCOR’s project team to filter out unwanted signals and fully control the way AMI information flows into the OMS. 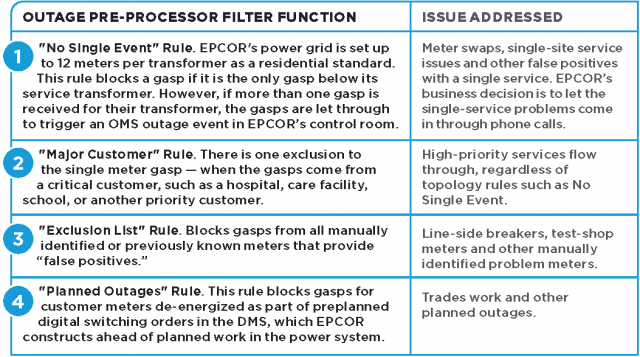 As implemented, the OPP allows EPCOR’s control operators to switch the integration on or off, either altogether or on an area-by-area basis (EPCOR uses electrical substation areas). This control is accomplished by leveraging the customer-site connectivity information fed into it from the ADMS. This proved invaluable during testing, commissioning, and rollout. The project team used an iterative approach to “fine-tune” the code and logic in the OPP filters and test it in small subsets of EDTI’s electrical system. Now, with all areas on full-time, the option remains for EPCOR’s control operators to turn off AMI-integration for any reason, including if something goes wrong with the AMI system.

With the integration of EPCOR’s AMI and OMS live, EPCOR’s control operators now have complete visibility over the full scope of outages from anywhere in the electrical grid. In the fuse scenario mentioned previously, no customer lights-out calls are required to identify an outage’s location—EPCOR’s OMS system treats the incoming meter gasps as no-lights calls and automatically creates the OMS incident in the ADMS.

Through automatic roll-up logic based on system connectivity (an OMS feature), the true interrupting device is flagged (the fuse in question) for the control operator to review. This process typically takes less than one minute. By the time the control room operators open the new outage incident in the ADMS interface to respond, the OMS has identified the entire scope of the outage. The interrupting device is flagged by the system (even if it’s passive, such as a fuse). The OMS incident lists all affected customer sites (based on ADMS model connectivity) and not just for the customers whose meters gasped. Having this information instantly at their fingertips allows EPCOR’s operators to effectively direct field resources to the blown fuse or device to begin the process of locally locating the system damage, and begin the isolation and customer restoration process.

This has been so successful, EPCOR has had power trouble trucks on-site on multiple occasions before the first customer phone call.

A big win for our customers – no need to call

Before linking EPCOR’s AMI and ADMS, awareness of an outage’s extent mainly came from customer calls. The time it took for calls to come in was a delay to direct field resources to the affected area. Add to that the time needed for the crews to patrol and verify the open or blown device, for the first 30-60 minutes, EPCOR could only offer general information to the public.

Now, with the capability to identify the full scope of outages in less than one minute, EPCOR feeds this information to its public website on a map and through to customers who have signed up for power outage alerts. Before, customers had to find a phone book or search online for EPCOR’s phone number, call and wait in a queue. Now, if the power goes off and the customer has signed up for alerts, they will receive a text or email alert that the outage has been detected and responded to, along with a hyperlink to EPCOR’s outage map. As operators and service reps add information to the OMS incident, such as estimated restoration times, this information flows through to the public. Communities count on us to deliver reliable service, and part of providing a positive customer experience means keeping them updated when the lights are out.

EPCOR has seen a reduction in call volumes when outages occur with better information available. This leads to another benefit — customers calling with important information – such as “wires hanging low in the back alley.” These calls come through to EPCOR’s public service representatives faster. In turn, EPCOR can respond to these potentially dangerous situations much more quickly.

Verifying all is well – Pings

Occasionally, damage can manifest in multiple locations when something in the power system fails. Because EPCOR’s OMS system “rolls” all affected customer records into a single-system incident (per outage), operators can click a single button in the outage incident interface to ping the meters of every customer in the list. EPCOR’s operators have successfully caught pockets of unrestored customers using this feature. It reduces the need for field resources to “patrol” to confirm all customers’ complete restoration. The result is no late, frustrated calls from customers.

“Our operators are thrilled with the information and tools these systems provide – 2020 was also our best year for reliability in the last five,” said Chris Chapelsky, senior manager of system engineering, whose teams are responsible for building and maintaining the ADMS system at EPCOR. “The success of these tools and processes have contributed to that, and, as a customer of  EPCOR, I’m happy too.”

While integrating AMI and ADMS systems can be a challenge due to the complex technical and operational aspects of these systems, the novel technique EPCOR used, and their experience using it, show that it is well worth the time and effort. EPCOR’s outage information is now unified, accessible, timely and relevant, benefitting EPCOR and its customers.

Check out the rest of the WE Magazine Spring 2021 Issue here.