New Mexico Gas Company’s (NMGC) two major pipeline projects — one in the Albuquerque metropolitan area and the other in a rugged canyon south of Taos — have boosted delivery safety and service reliability, while better positioning both regions for future growth.

Building a new pipeline has always been a large undertaking, but companies today must navigate a growing labyrinth of physical and regulatory barriers before work can even begin.

The $14 million Pilar Re-Route project near Taos started in August and was expected to finish in early 2018. Because of unstable soil at the location of the existing, eight-inch Taos Mainline, crews are installing a new, 12-inch pipeline on the other side of the Rio Grande in a highway roadbed. 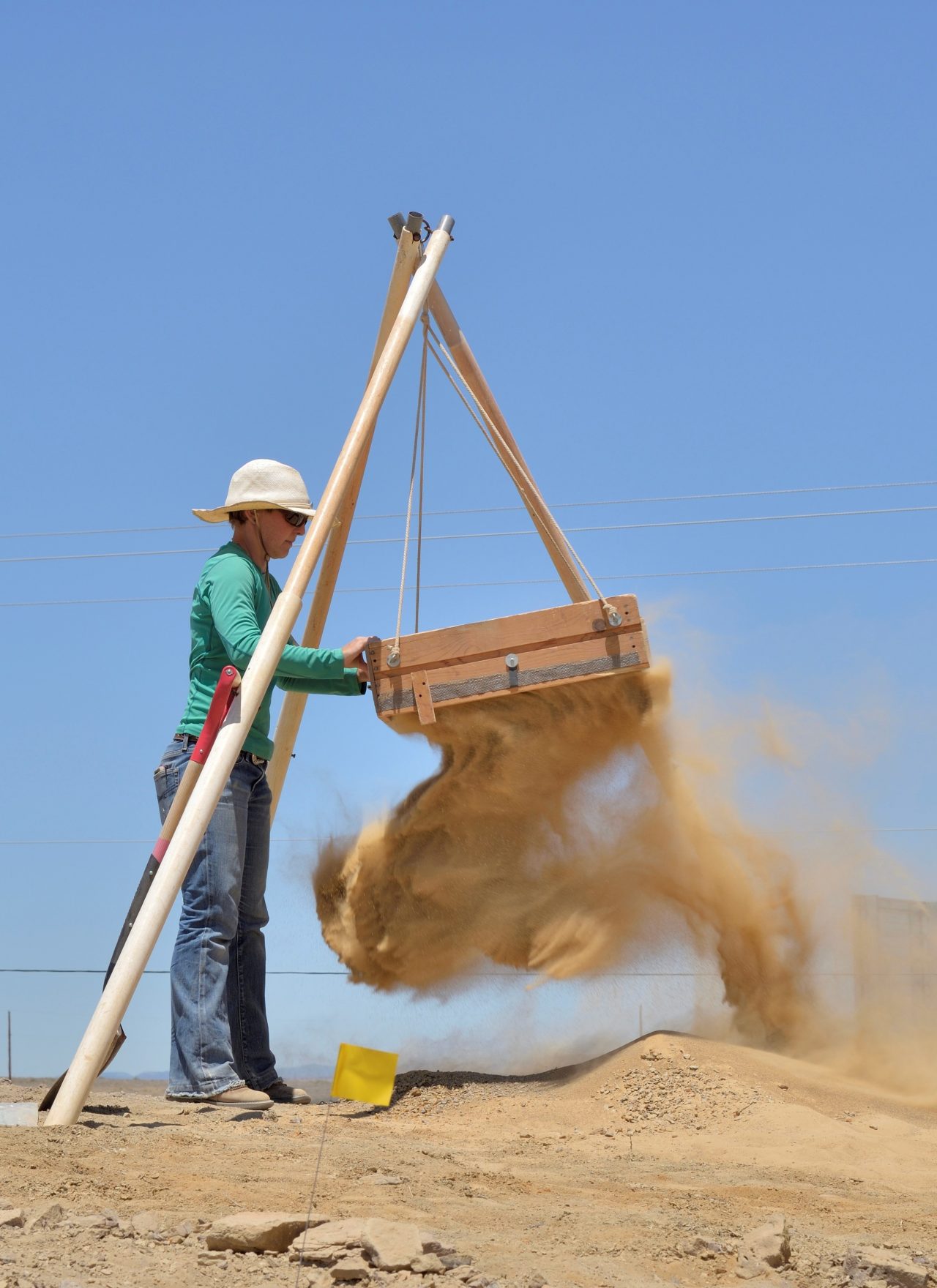 A paleontologist sifts the soil at a location in the path of the Rio Puerco loop project. (Aaron Kammer, NMGC)

RIO PUERCO
The Rio Puerco project reinforced the connection between NMGC’s system and the interstate pipelines that traverse New Mexico.

“By improving infrastructure in the Albuquerque metro area, we are better positioned to support future industrial or manufacturing facilities,” said Tom Bullard, vice president of engineering.

“By increasing NMGC’s supply portfolio, the new pipeline allows a much larger amount of gas to be delivered to the southern end of our transmission system in the Albuquerque area,” Bullard explained. “This supply directly affects customers in Albuquerque, Santa Fe, Los Alamos and further north into the Taos area.”

The Rio Puerco line also allows NMGC to better receive natural gas from both the San Juan and Permian basins, as well as gas from more distant supply basins outside New Mexico.

The additional capacity also provided the capability for future system growth, such as the possible construction of gas-fired generation and cogeneration facilities, as well as for growth in the Albuquerque and Santa Fe areas.

COVERING ALL THE BASES
One of the biggest challenges to the project was working with a myriad of outside entities.

From design to completion, NMGC worked with the U.S. Army Corps of Engineers, the Bureau of Indian Affairs, the Fish and Wildlife Service, the Environmental Protection Agency and the Department of Transportation. This effort was in conjunction with the landowner, the Laguna Pueblo tribe.

Each agency required a permit and approval process. The discovery of nesting sparrows required planners to develop construction plans in compliance with the Migratory Bird Act, as well as mitigation measures for fossils and archeology along the work corridor. NMGC also worked with the BNSF Railway on that portion of the process.

Protecting the scenic landscape in New Mexico during construction and operation is always a priority. From drafting and surveying to construction, NMGC worked with the agencies to identify and execute design solutions that were beneficial to all parties.

The most significant engineering challenge on Rio Puerco was a climb across an escarpment that runs along Albuquerque’s west mesa. While working through that area, crews cut across jagged, boulder-strewn volcanic rock to install the pipeline. Other challenges included crossing a major interstate freeway, a state highway and two railroads.

The Rio Puerco project uncovered a dinosaur quarry near Laguna Pueblo’s tribal casino along Interstate 40. A team of geologists and paleontologists were called in to mitigate a fossil field that was discovered in the path of the pipeline. 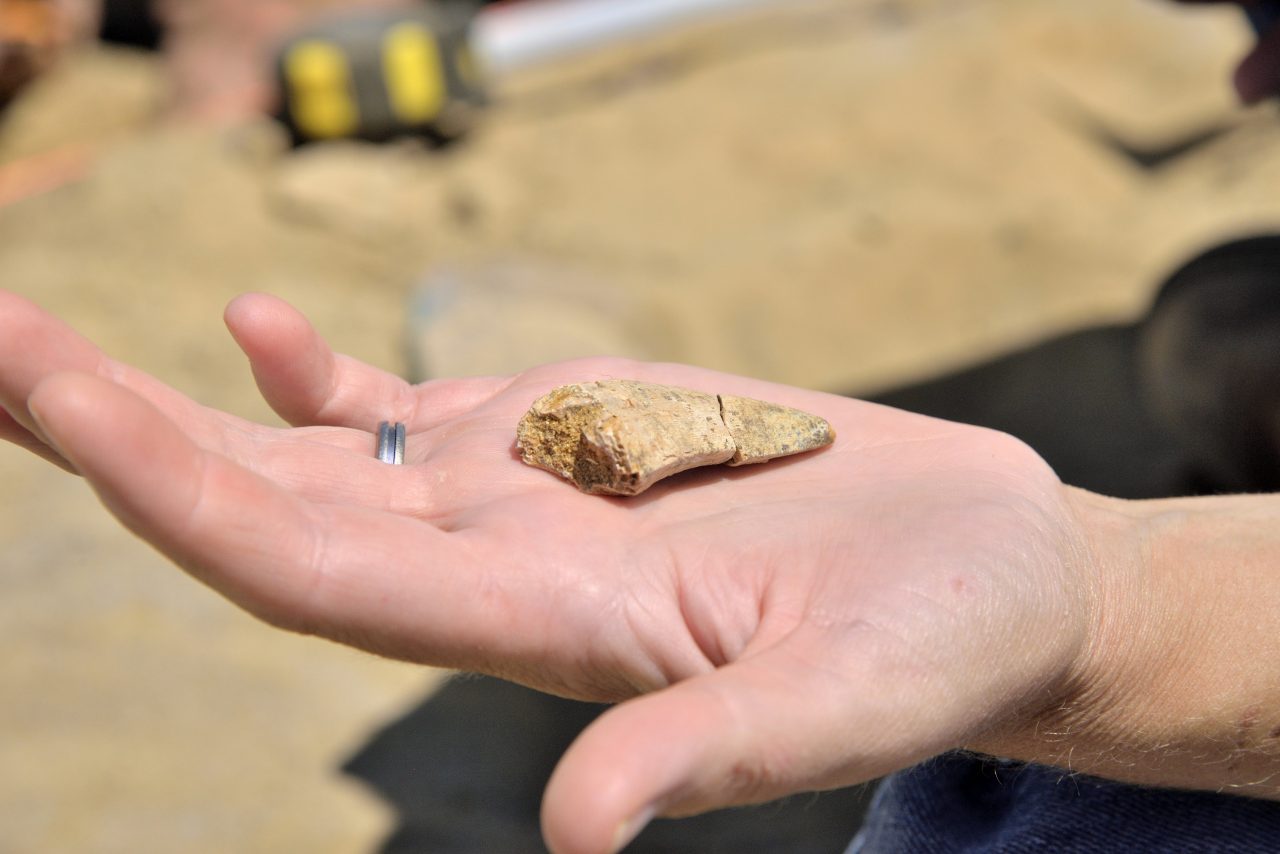 A fossilized dinosaur tooth discovered at a location in the path of the Rio Puerco loop project. (Aaron Kammer, NMGC)

Rio Puerco was a large project by NMGC’s normal standards, both in scope and budget. The company typically undertakes a project of this size every five to 10 years. It was successfully completed on time, within scope and under budget.

Last December, the Rio Puerco loop was named an Eagle Award winner as Infrastructure Project of the Year for 2017 by the New Mexico chapter of NAIOP, the National Commercial Real Estate Development Association.

TAOS MAINLINE
In August, NMGC began construction to realign a 6.2-mile stretch of pipeline in North Central New Mexico. Initially, work was expected to run through November, but engineering challenges in the narrow canyon extended the project. 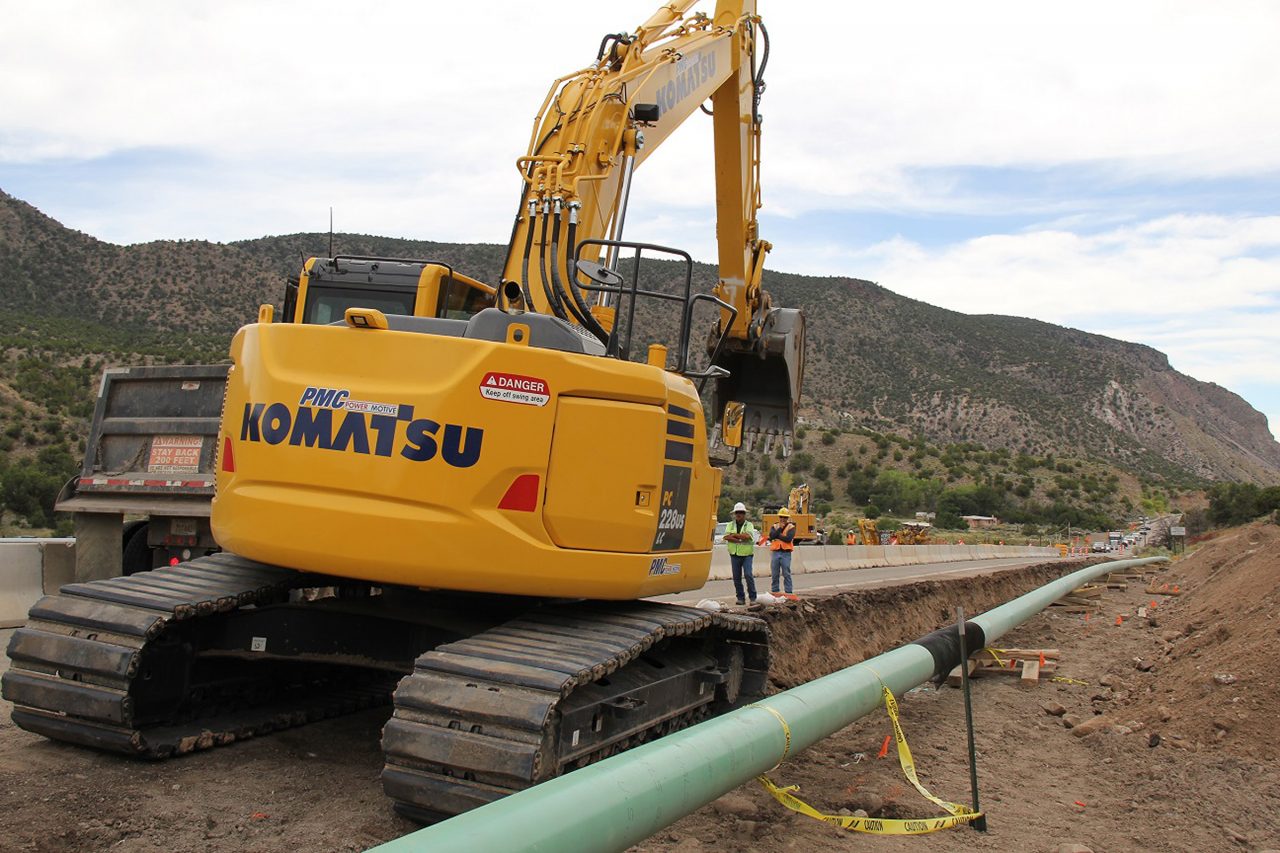 An excavator clears the route for a 12-inch natural gas pipeline on the Pilar Re-Route project in September 2017. (Tim Korte, NMGC)

Three landslide areas are impacting the eight-inch pipeline, which was installed in 1964. Strain gauges monitor the pipeline, which must be readjusted periodically to ensure that natural gas is safely delivered to 16,000 NMGC customers in Taos County.

Careful planning was conducted to ensure no service interruptions during construction. This included the temporary use of liquefied natural gas trucks to feed the pipeline during the hours needed to connect the new system.

The project was complex because of a steep hillside that was traversed on the north end of the project; and the narrow, winding highway that sits just above the Rio Grande to the south in a rocky canyon called the Rio Grande Gorge.

Most of the project area is administered by the Bureau of Land Management (BLM), so full compliance with the National Environmental Policy Act was applied to the project. 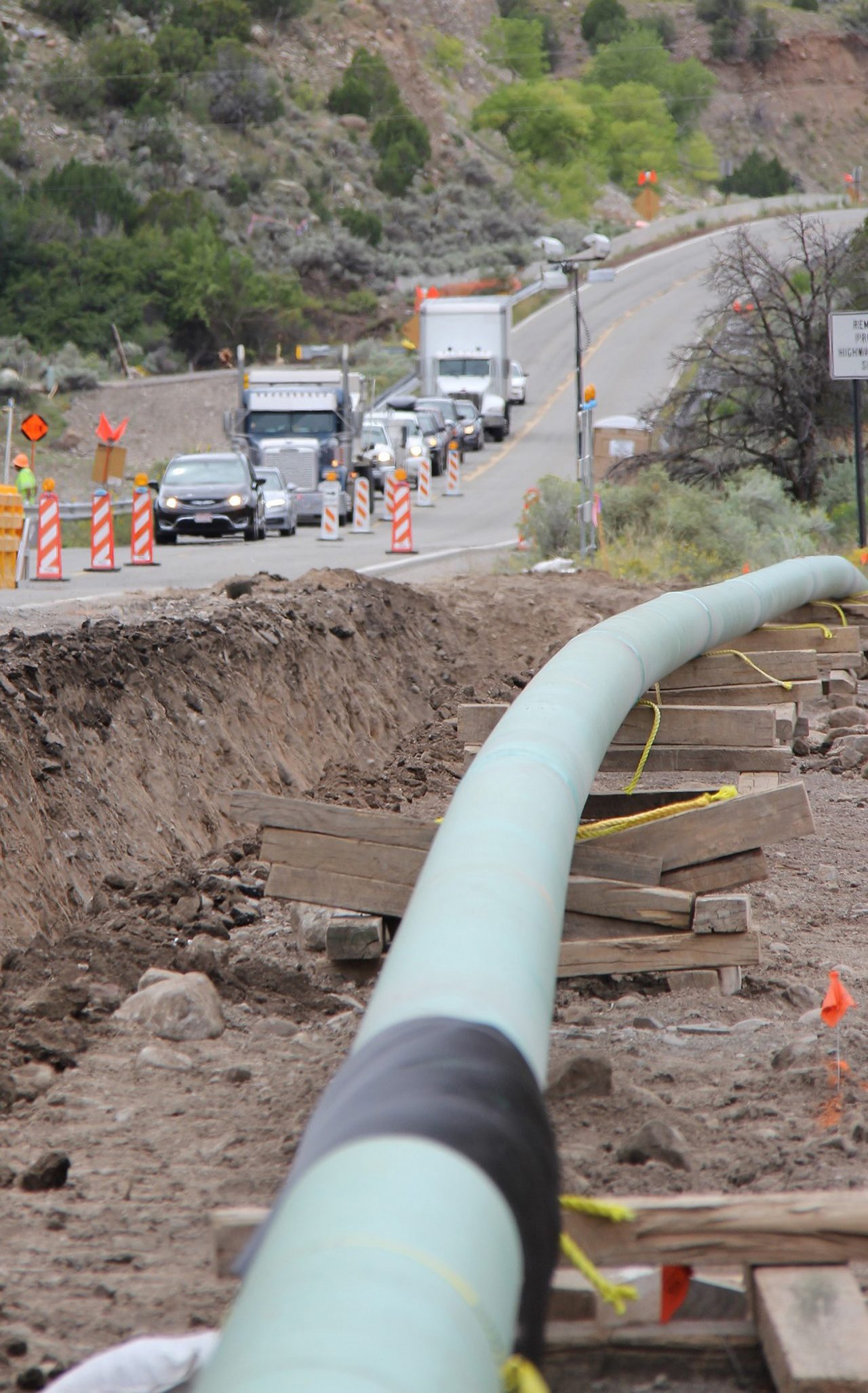 Throughout the process, NMGC’s land services, environmental and engineering teams developed plans that offered multiple routes and methods of construction.

Many studies were conducted in the proposed corridors, including assessments of impacts to birds, viewsheds, and archaeological and cultural artifacts, as well as the potential biological and human impacts.

“Our teams spent a lot of hours and worked earnestly to determine which route offered the lowest overall impact,” Bullard said. 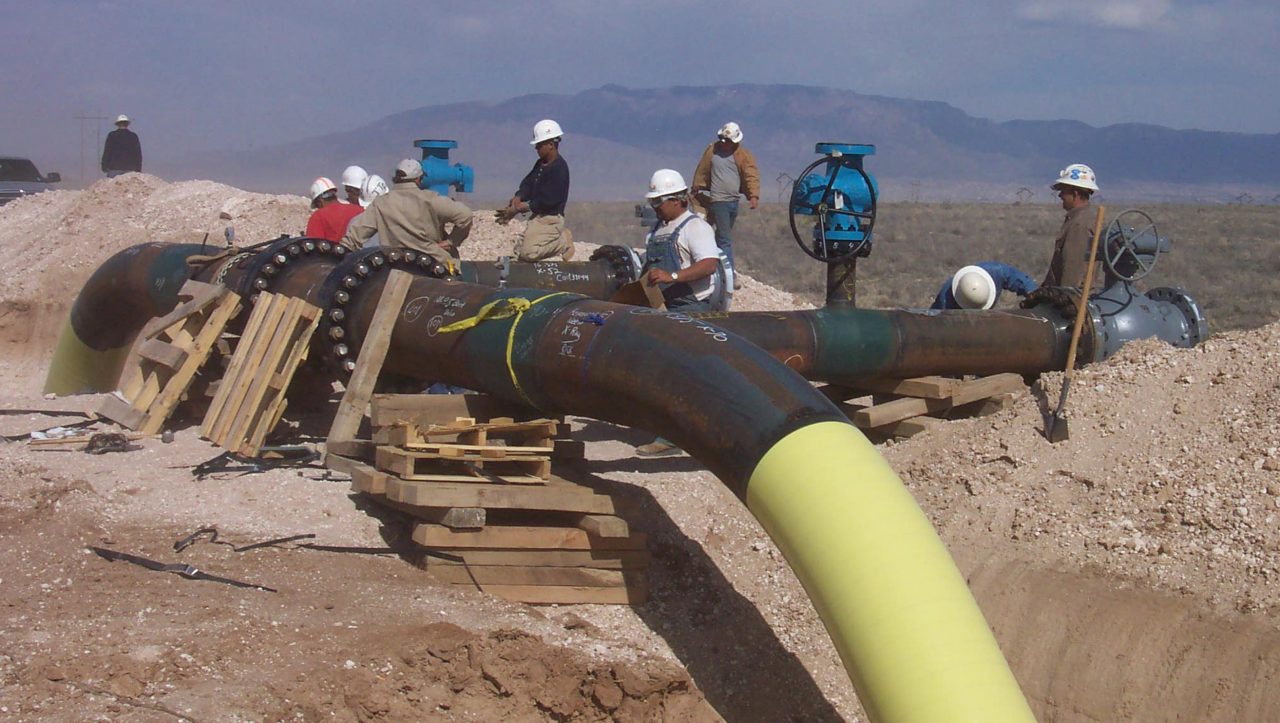 Crews install a 24-inch looping pipeline for the Rio Puerco project during the summer of 2016. (NMGC)

Project planning started in 2014, when NMGC filed a right-of-way request. The BLM led a public comment process in 2015, which resulted in an environmental assessment in 2016 and final approval in April 2017.

Using the impact reports, the pipeline routes were vetted after consultation with agencies and consideration of public comments. Feedback from Taos-area groups was critical to deciding that the highway location was the safest and least environmentally harmful option.

“The tradeoff was that we knew that the preferred route would create headaches for motorists over several months of construction,” Bullard said.

The road is the main highway from Santa Fe to Taos, a popular year-round destination for tourism and outdoor activities such as skiing, rafting and camping.

NMGC also worked closely with the New Mexico Department of Transportation and traffic engineering consultants to ensure the safety of motorists and construction workers. Because of the high volume of vehicles and the limited space for construction, the project required an extensive traffic control plan.

The highway’s northbound lane was closed in one-mile sections as crews excavated, staged and welded the pipe. Feet away from construction, but protected by concrete barriers, pilot vehicles led motorists through a restricted one-way zone.

Other than breaks over the Thanksgiving, Christmas and New Year’s holidays, traffic control operated around the clock. Traffic wait times averaged 10 to 15 minutes. 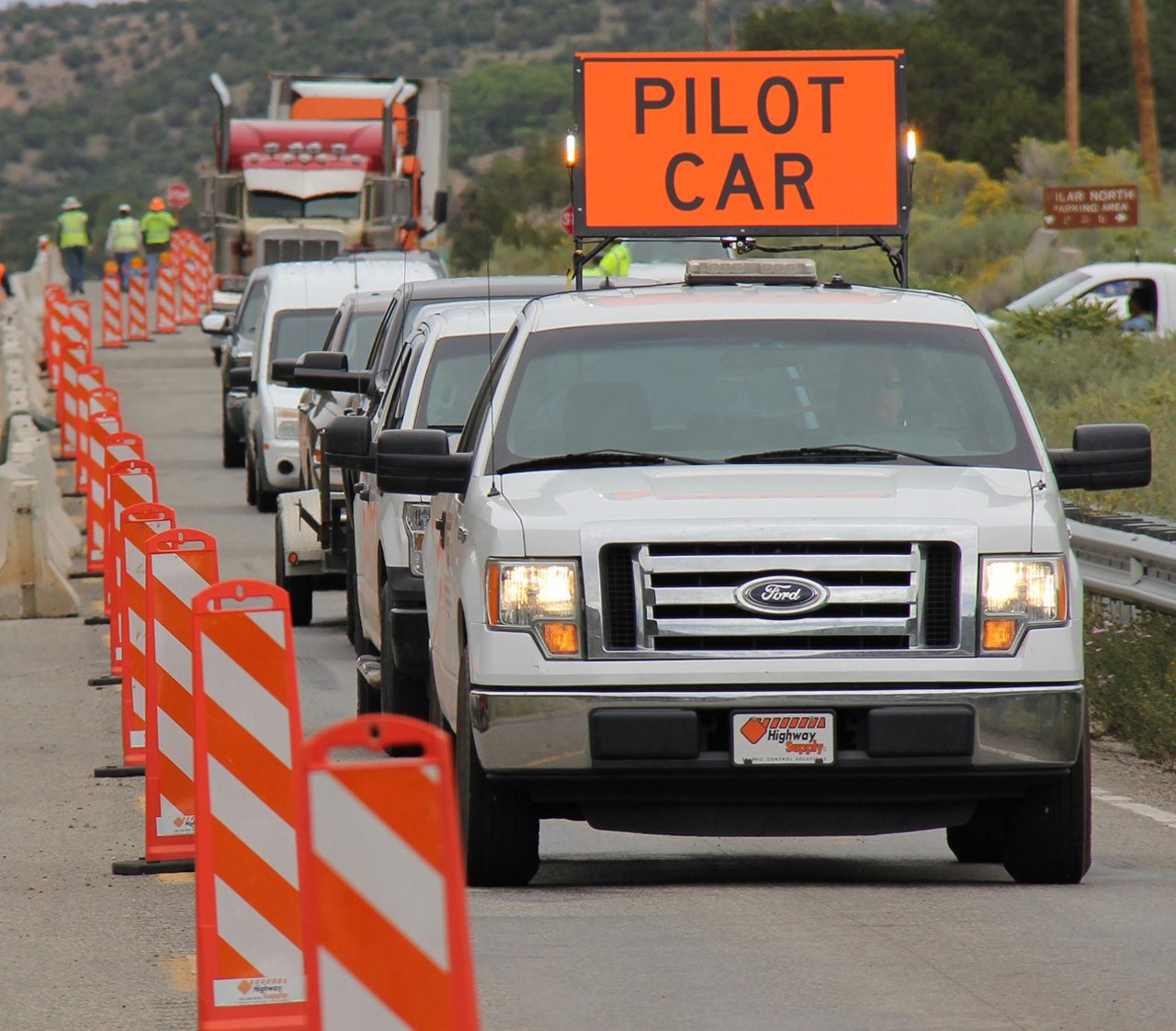 A pilot vehicle leads a column of motorists on New Mexico Highway 68 during construction on the Pilar Re-Route project. (Tim Korte, NMGC)

To address concerns about traffic delays, NMGC representatives attended a series of public meetings in Taos and other communities during the spring to brief elected officials and other leaders. Project updates were emailed regularly to stakeholders.

Outreach included newspaper, radio and internet advertising, a highway billboard south of the project area, and communications with the hotel and restaurant industry in northern New Mexico to target out-of-state visitors.

The environmental team worked to protect archeological sites in the canyon, including ancient Native American petroglyphs and similar markings left on volcanic stones by Spanish colonial explorers. Right-of-way agents met with property owners in the construction corridor to negotiate access and land-use agreements.

“It required a comprehensive effort by several departments to prepare and execute the Pilar Re-Route project,” Shell said. “We are proud that we demonstrated our ability to tackle a complex engineering problem, while simultaneously engaging and informing a diverse array of stakeholder groups.”

Header Image: Supervisors survey pipeline installation for the Rio Puerco loop project west of Albuquerque during the summer of 2016. (NMGC) 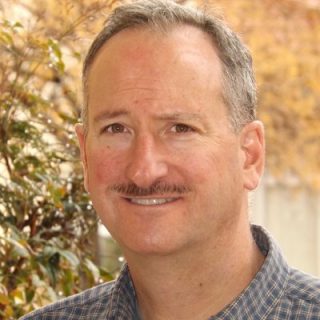 Tim Korte is a former journalist who now works as manager of communications at New Mexico Gas Company. Appointed to the position in November 2016, he is responsible for external and internal communications, and serves as the company’s primary public contact.