Removing uncoated steel pipe substantially reduces corrosion-related leaks in the natural gas pipeline system, improving public safety and protecting the environment against methane emissions. During the last months of 2015, NW Natural racked up a major accomplishment. The company eliminated all known bare steel mains and services from its system — placing it among a handful of industry leaders.

A Brief History of Pipeline Safety

When the company that became NW Natural first built pipelines, the Civil War had not yet started. James Buchanan was president of the United States. And most gas pipelines were made of wood or cast iron.

As metals production improved, gas companies began installing steel pipelines. The new pipes were less prone to leaks. But they were susceptible to corrosion that can lead to pipeline damage and escaping gas.

In the 1950s, pipeline operators started installing coated steel, and plastic pipes became available by the 1960s. The modern products resist corrosion and are more durable that steel, which reduces damage from earth movement and other outside forces. In 1971, federal regulation prohibited the installation of new bare steel natural gas pipelines.

Meanwhile, thousands of miles of old pipes were still in the ground across the nation. For most companies, the expense and time that would be required to remove old pipelines was nearly unmanageable.

For many years, NW Natural knew that removing old cast iron and bare steel pipes was the best course for its customers, the public and the company. While the company had the know-how, the challenge was how to pay for these large projects.

In the mid-1980s, the company went to the Public Utility Commission of Oregon with an innovative proposal.

“We proposed rolling cast iron removal costs into rates annually pending regulatory approval, rather than waiting for a rate case that might only occur every few years,” said Grant Yoshihara, NW Natural’s vice president of utility operations. “Yearly rate recovery would allow us to remove cast iron pipes faster than our budget would normally allow.”

The PUC supported the win-win solution. It meant that the system could become safer more quickly, ratepayers would be protected from big rate jumps caused by waiting years between rate cases, and shareholders would be reassured.
Yoshihara noted that regulators also realized that an accelerated replacement program would reduce the costs to monitor and repair aging pipes.

By 2000, NW Natural was one of the first companies in the country to eliminate cast iron pipes.

The PUC was so satisfied with the outcome that it agreed to extend the program to cover replacing bare steel pipes. It was later expanded to cover pipeline improvements related to federally required pipeline safety projects as well.

NW Natural began replacing its bare steel pipelines in 2001 and completed the last miles in late 2015. The original agreement called for a 20-year program, but the OPUC shortened the deadline in exchange for an increase in the annual rate recovery cap.

“The earlier agreement capped the dollar amount of annual rate recovery,” Yoshihara said. “We asked to raise the cap over two years to complete a particularly long project all at once to save time and money.”

The regulators approved and gave NW Natural a target of December 2015 to finish all known bare steel removal. The company met the target, removing more than 1,360 miles of bare steel main since 1985. 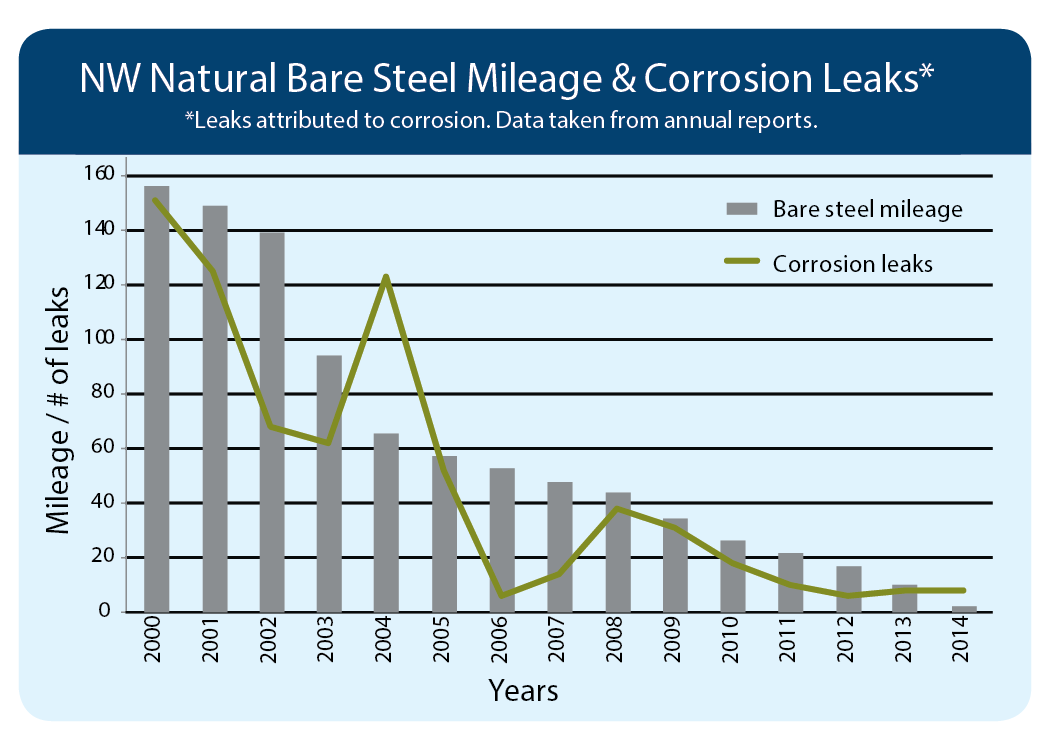 While NW Natural is free of the old pipes, more than 60,000 miles of bare steel pipes remain in use across the country. Several older cities have seen serious accidents attributed to cast iron pipes in recent years.

Today, NW Natural has one of the most modern pipeline systems in the nation. New pipe materials have a life expectancy of 100 years or more. Plus, NW Natural’s rigorous construction protocols and quality assurance programs help keep customers and local communities safe.

It’s a success story that started almost 30 years ago thanks to visionary engineers, company officers and Oregon regulators.

Claire Levine is a Portland writer who focuses on energy and public policy issues. She was a communication specialist with NW Natural for 15 years.